HOME / About Us / Window Tint Philippines – All About Film

HOME / About Us / Window Tint Philippines – All About Film

Window Tint Philippines – All About Film

If you are new to the subject of window film, this section provides a good overview about how window film works, what the benefits are, and important facts to be aware of:

Basic understanding of what window film is made of and how it performs when applied to glass.

Important tips on how to take care of a glass window with film to ensure product longevity.

People utilize window film for a number of different reasons. Find out the many ways to use window film.

Important tips on how to take care of a glass window with film to ensure product longevity.

Window film is a self-adhesive polyester film that is applied to glass surfaces. It is used as a “retrofit” application for existing glass on automobiles, homes and commercial buildings in order to upgrade solar control, safety and appearance.

Solar radiation from the sun is divided into 3 components: visible light we can see, infrared we feel as heat and ultraviolet rays, which are invisible. As solar radiation strikes a piece of glass, window film acts as a “sunscreen” to block harmful UV rays as well as regulate the levels of heat and light passing through the glass. The amount of heat and light rejected is dependent upon the type of window film selected. 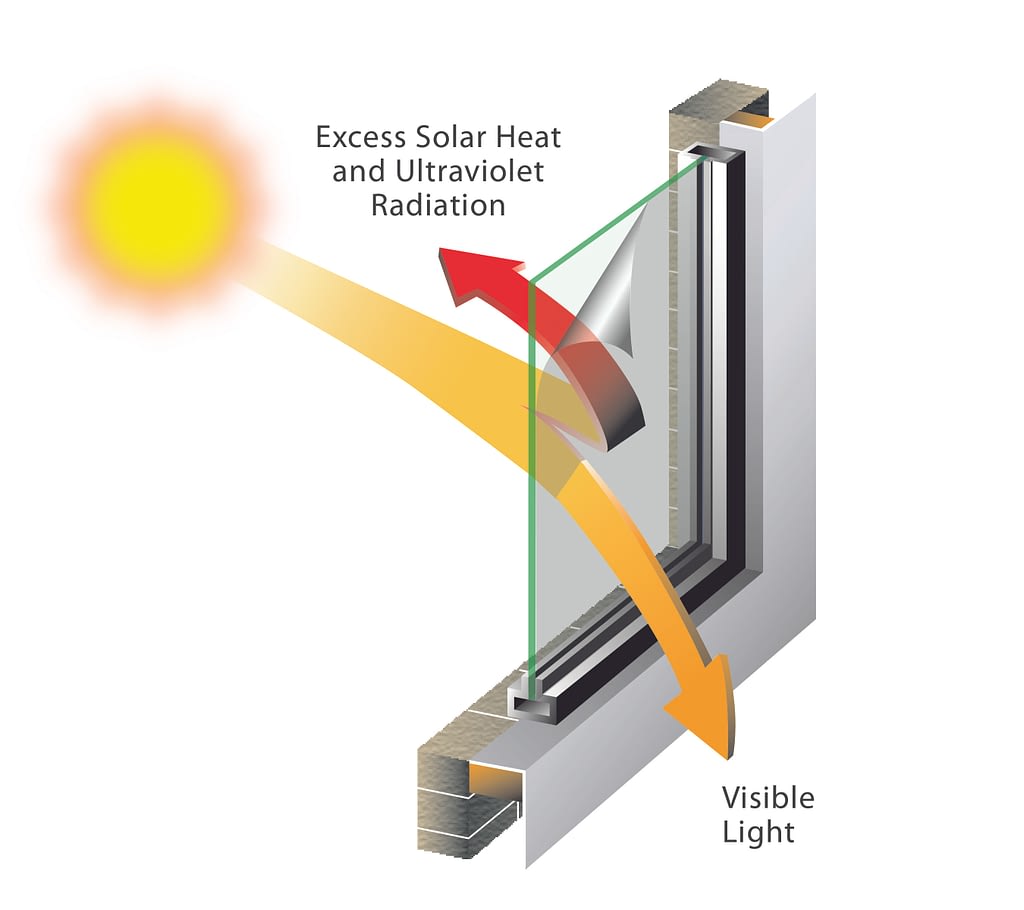 Once window film has been installed, it is very common to see a slight haziness and/or small water pockets. This is a normal part of the adhesive bonding process called “curing”. Depending on the film type and weather conditions, it may take up to 30 days for the film to be fully cured. The curing process is slow because the remaining water used in installation must evaporate through the film. Sputtered and heavy security films take the longest to dry and will take longer for any hazy appearance to disappear.

Once the film is dry and cured, it is then safe for the film to be cleaned. The best cleaner is a simple solution of water and a small amount of soap. Clean the window and then squeegee dry with overlapping strokes in the same way you would clean the outside of your car windows. You may also clean the film surface with any normal strength glass cleaner. Products with ammonia will not damage the film if used in reasonable quantities and if the film is not left to soak in it. Do not use any abrasive cleaners, industrial strength glass cleaners and/or any other window cleaning tools that may scratch the window film. Remember, the surface of the film is coated with a scratch resistant not scratch-proof coating. 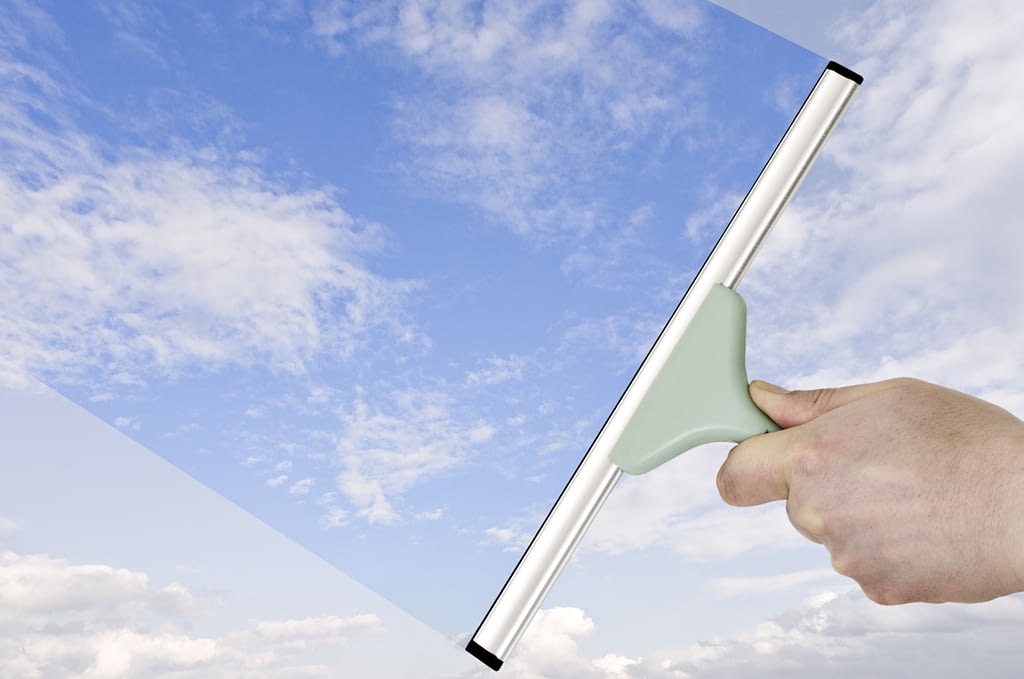 Glass is designed to act as a barrier from exterior elements (i.e. wind, rain and snow) while providing a natural view of the outside world. When solar energy or sunlight, comprised of heat, light and UV Rays hits an untreated window, almost 90% of the energy is transmitted through the glass. In contrast, once solar control window film is applied to glass nearly 80% of solar energy can be blocked. The special dyes, metals or nano technology within the film, act as a solar energy barrier by either absorbing or reflecting a percentage of the energy from passing through the glass.

The level of absorption and reflectance is dependent on how the film is constructed. Dyed films contain no metal and are considered non-reflective because they absorb solar energy. They are not as effective in controlling solar heat and light because they do not provide any solar reflectance. On the other hand, metallized or nano films provide both solar absorption and reflectance. They do a much better job of solar control since their construction properties control both heat and light from passing through the glass surface. Consult a Nano-Tech Window Films professional to find the best films to suit your needs. 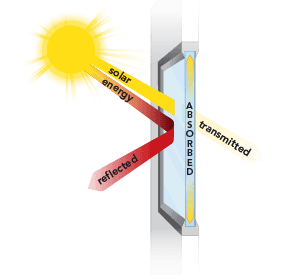 One of the primary reasons people choose to add window film is to control the negative effects of the sun such as heat, glare, UV damage and fading. By minimizing heat, window film can reduce A/C costs and increase comfort in your car, home and office. Glare reduction helps to improve visibility, and reduces eyestrain. Rejecting UV rays helps to protect your skin and eyes from damage and slows fading of interior furnishings, carpets, artwork and other valuable belongings. There are a variety of window film shades or colors that can enhance the look of a car window as well as complement the design of a home or office. Window film can also provide additional privacy as well. Accidents involving glass can create dangerous situations, especially in residential homes with children. Safety film effectively holds broken glass together, greatly reducing the chance of injury. Trident Protective films are available to help prevent vandalism and theft. While they cannot entirely stop someone from breaking through glass, the thickness of the film makes it more difficult and time consuming to breach the glass. Anti Graffiti Glass is expensive to replace. Many commercial building owners choose removable anti-graffiti film to protect their glass from damages caused by graffiti and glass etching. Other commercial uses include; display cases, bathroom stalls, mirrors, elevator doors and most non-porous surfaces. Check with your local Nano-Tech professional to find the style suitable for your needs. 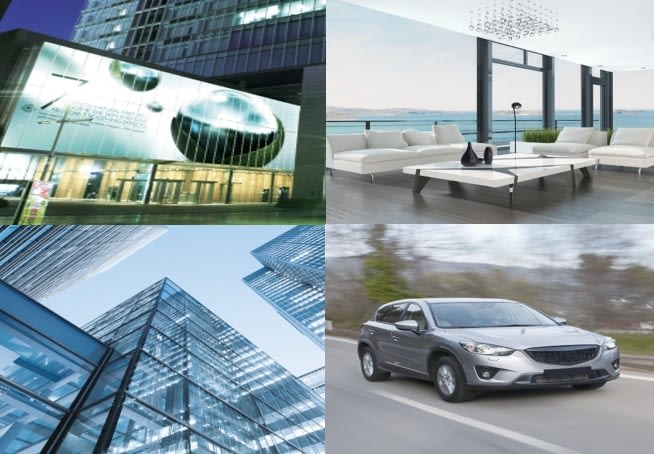 Reality: While window film does a tremendous job in reducing the amount of fading caused by harmful UV rays (blocking 99% or more), solar heat (cutting up to 82%), and visible light. It cannot eliminate 100% of the deteriorating effects of the sun. Window film is an effective solution to reduce fading in comparison to untreated glass.

Reality: Although a dark or reflective film may reduce the view from the outside looking into a car, home or office, the same is not true when looking from the inside out. This is due to Visual Acuity where the human eye adjusts to the amount of light it is receiving, enabling you to see outside, even when the light transmission has been reduced.

Reality: Many companies claim that security window film will protect glass from such extreme forces such as hurricanes and even bullets. The tests used to promote these claims are often conducted using ½-inch thick glass and multi-layers of security film—both uncommon situations. Most installed glass is 1/8-inch to ¼-inch thick in general. No window film can stop a bullet on standard glass. In addition, “hurricane proof” is a complete misnomer. If a hurricane can rip open a roof, it only makes sense it can destroy a glass window as well. Security level window film is designed to reduce injury and damage by holding glass together after it breaks.

Reality: Laws vary from state to state, and country to country. In the U.S., window film is prohibited on the front windshield but permissible on the rear side windows and back windshield. The amount of allowable light transmission varies depending on state laws. Many countries allow window film on the entire car as long as they meet certain light transmission standards. Consult with your Nano-Tech professional to stay within legal boundaries.

Myth – Anyone can install window film

Reality: Installing window film may look relatively easy but there are many circumstances that could lead to an unprofessional installation. It is very easy for the film to become contaminated with dirt, dust or hair, thus ruining the film and creating dissatisfaction. A professional installer is experienced with proper preparation and application techniques to prevent contamination or other problems with the film, and ensure a quality installation.